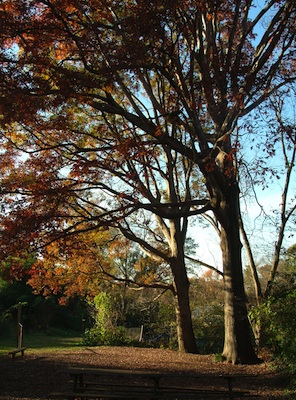 Many a climber got their training in "Nimrod" or "Diana," TCI's first teaching trees.The trees we use for climbing are always named. After all, they're living things that share the world with us. Personal names help us identify climbing trees and help us develop a more personal relationship with them. In the past, trees used as markers for travelers because of their size and location were given names and became landmarks.

Tree climbers name their trees for different reasons. The name might be for someone they know or revere, or it might be mythical in nature. The tree might be named for its shape or its resemblance to something else in nature. Some trees receive conventional names at first, but usually end up with creative, offbeat nicknames. Though the team of climbers might decide to name the tree together, the first person to make the ascent in it generally performs the "naming ceremony."

The trees at right were named "Nimrod" and "Diana." These white oaks were TCI's first teaching trees. We consider Nimrod, whose diameter at breast height was 53 inches, to be the "most climbed tree" ever because his branches hosted TCI students and beginning climbers for over 20 years. His name refers to a biblical figure, described as "a mighty one on the earth." Diana, whose diameter at breast height was 48 inches, was the goddess of the hunt and wild animals in Roman mythology; it is thought that oak groves were sacred to her.